After dozens of operations and radiation treatments, the cancerous tumor in Heidi Hooper’s upper right arm was finally killed, taking with it most of the arm itself. Another operation removed a muscle from her back and placed it on the arm to protect the bone, but provided no other function.

With this permanent handicap, Heidi Hooper knew her days as a metal sculptor were over. She had received her Sculpture degree from Virginia Commonwealth University, usually listed as one of the top five sculpture schools in the country, and had done Master’s work at UCLA in Long Beach and the Massachusetts College of Art in Boston (where she also taught for some time). Her work had been seen in galleries around the country and her artistic metal armor pieces had won her many costuming awards, including at Science Fiction’s biggest convention, Worldcon.

But then, at the turn of the century, she was left wondering what she could do. She could only work a few hours without pain, and often had to stick her arm into a machine that would massage it to treat the lymphedema she suffered.

One thing she knew: She would not give up. The monster inside her demanded that she create.

She tried sculpting in soft clays, making dolls of friends and famous people. This attracted coverage in some doll magazines and even got Peter Falk’s attention, who bought the one she had made of his character from “The Princess Bride.” But even creating those were painful for her.

Then she discovered dryer lint. The first work was quite primitive, but she persisted and taught herself how to make each piece more intricate than the previous. Galleries started to take notice, and it wasn’t long before Ripley’s Believe it or Not found her, featured her in one of their books, and bought her work to show in their museums around the world.

Her fame grew, and as the work got larger and more complicated, serious art collectors started buying her work. Consumer Reports did an side piece on her work (next to an article about dryers, of course) and called her “the Andy Warhol of dryer lint.” So she did a very large piece featuring Warhol which won her the prestigious Niche Award in 2014. This led to a series honoring famous artists as well as a second Niche Award in 2017 for “Magritte in Dryer Lint.”

In 2018, the ABC TV show “To Tell the Truth” flew Heidi out to Hollywood, where she appeared on one of their episodes where the guests (including Mel Brooks) had to guess which one was the real dryer lint artist. 60 Second Docs did a one-minute documentary on her in 2019.

In 2021, she received the Courage Award from the American Cancer Society and was honored to be one of only 100 artists chosen from across Pennsylvania to show in the State Museum of Pennsylvania. She was also profiled on American Spark.

She’s never forgotten her fantasy and science fiction roots, though, and loves doing fantasy pieces for her own amusement.

Heidi says she could not have done so much if it wasn’t for fans saving their more colorful lint and sending it to her. She thanks them each year with a free signed print.

She and her husband live in the beautiful Pocono Mountains of Pennsylvania. They have been married more than 30 years, and enjoy hearing the pitter patter of little feet around the house (they have four cats). 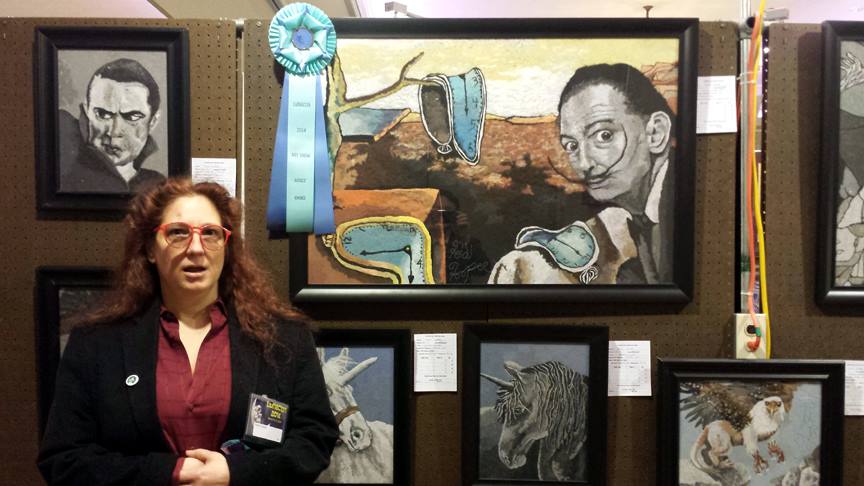